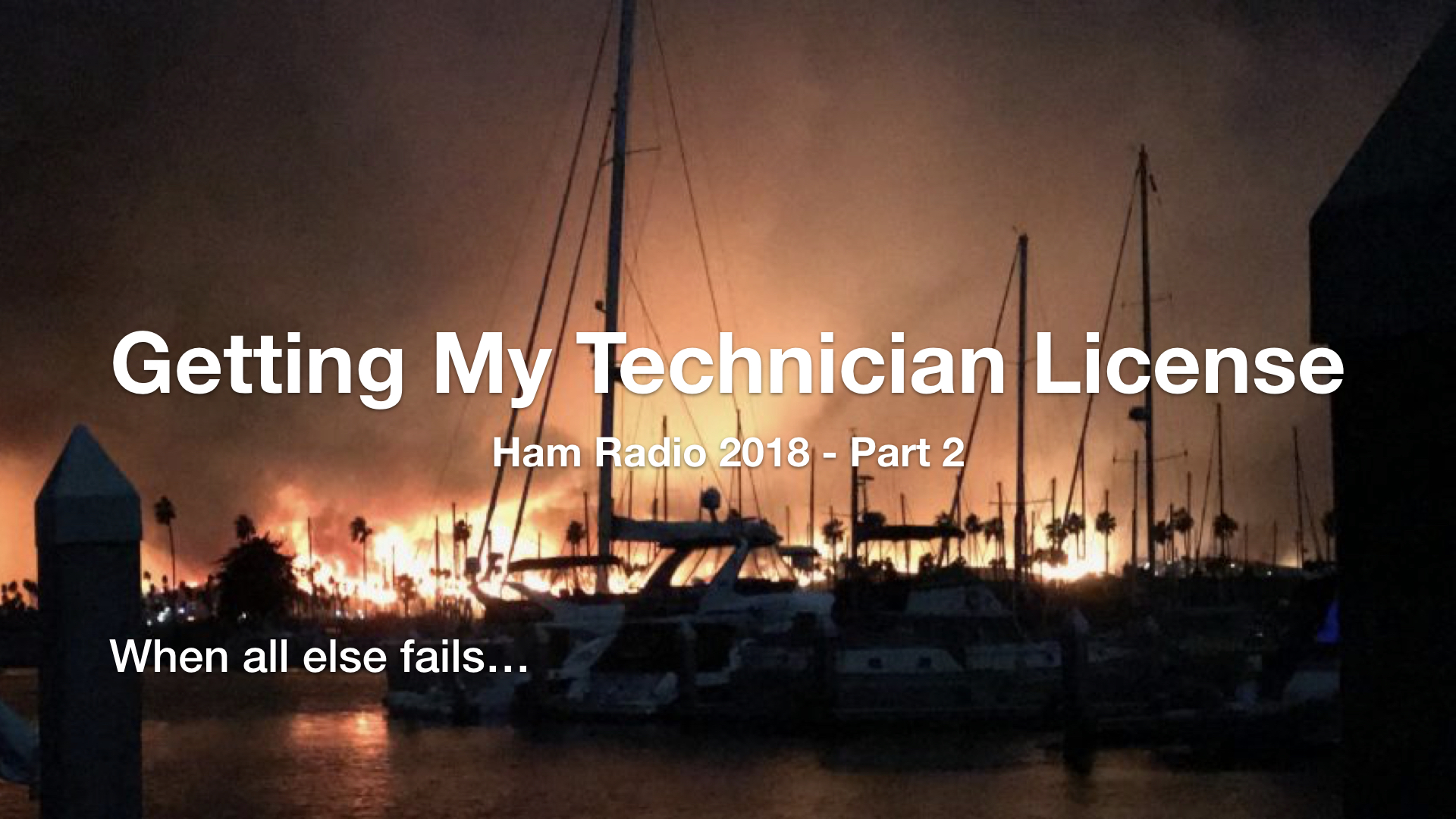 In Part 1 of this series, I wrote about why I decided to become a Ham Radio Operator in 2018. This post goes into a bit more detail about how I went about obtaining my Technician Class License.

Amateur Radio Licenses are issued by the FCC and in order to obtain a license you have to pass 35 question multiple choice test that is given by a group of at least 3 Volunteer Examiners (VE), who are themselves Amateur Radio Operators. There are a variety of ways to prepare for the test including self study via books, audio CDs, YouTube videos and formal classes.  Here’s how I approached it.

The Self Study Approach 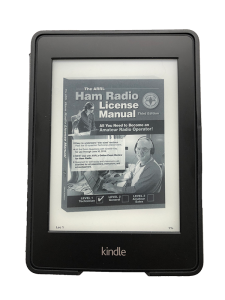 I began with The ARRl Ham Radio License Manual that is published by the American Radio Relay League (ARRL) as both a physical book and as an eBook, which I immediately downloaded and began reading.  This book is great, but it’s dense with information. It was perfect for learning the why and developing a solid understanding of how things worked, which is exactly what I was interested in learning.

I quickly realized that due to the sheer volume and depth of information covered by the Technician exam, trying to understand they why and how everything worked was more a kin to a full semester long university course. The topics ranged widely and the format of the exam, multiple guess, can often test a learners test taking ability far more than their actual understanding of the subject matter. I therefore knew I needed to not just understand the materials, but learn how to pass the test so I could get on the air.

Next I found a YouTube series by Andy KE4GKP who calls himself the Ham Whisperer (http://hamwhisperer.com).  Andy presented a series of videos that is essentially a narrated slide show where he breaks down the exam, reads each question, and gives you a strategy for how to find and remember the correct answer. After working through a section, he gives you a practice test where he again reads each question and the possible answers, you answer on your own, and then go back to his website to check your answers.

I found that combining the theory and deep learning approach from the ARRL book, combined with the hamwhisperer.com videos were proving to be a pretty good way for me of working through the content, and there is a lot of content.  The question pool that the Technician exam is created from is over 400 questions. Taking a straight up slide show approach to going through the information, proved to become tiring.

I was still feeling a bit overwhelmed by the sheer volume of information, and I began to wonder if this was even something I could achieve in a short period of time.  I do not have a strong background in electronics, so it kept feeling like an insurmountable task to truly learn all of this information. What continued to drive me though, was the ongoing Thomas Fire which had continued to grow day after day, week after week.

When the fire began moving into Santa Barbara County, my conviction to obtaining my license was reinforced as I started seeing maps appearing in the twitter feeds of Hams that showed the flight paths of the air support in near real time. I downloaded every commercially available app I could find, looking for this information but couldn’t figure out where they were getting these maps from.

It turns out that these Hams had the equipment to listen to the signals coming from flight transponders and by leveraging mapping API’s those data could be plotted in real time to show the flight paths of the fire air support. Being able to see where the air support was actively working, gave a remarkably clearer picture of where the fire was, how fast it was moving and in which direction it was moving way better than any of the publicly available news media reports or social media posts.

#ThomasFire No helicopters above Toro Canyon, but this is the back and forth of the fire helicopter doing drops at Santa Monica Canyon. Current location appears to be a reservoir. #Carpinteria # pic.twitter.com/kKiErC8nXH

I should be clear that throughout this event, I was personally not directly in harm’s way. As a severe asthmatic, the air quality was so bad that it was weeks before I could even return to my boat in Ventura harbor where I’ve lived for years. I desperately wanted to get out there, but it just wasn’t safe for me to do so. Instead I invested an enormous amount of time and energy to trying to understand what was going on day by day with the fire and how to find accurate, official information while filtering out the chaff and help the overall effort of directing others to the best official sources of information.

In the end, I was finding that the pure self study method to obtaining my Technician license was proving difficult to sort out all of the information on my own to the level I assumed would be required to pass the test.  I felt like I need a little more help and a class would be a great way to do that.

It turns out that December was a fairly difficult month to find a Ham Radio Class. Face to Face classes require an instructor, a physical location, and a time commitment by a group of students to attend the class. I found that I would have to wait until January to find a class to help me through the materials.

On the evening of January 10th 2018, while searching on the ARRL.org site I found a Technician Class that was scheduled for that coming Saturday and Sunday January 13-14. Thinking about all of the events of the previous month, I took a chance and emailed the instructor around midnight to ask if there was still room in the class.  I got a response the next morning saying that there was still room, but they asked what my background in electronics was. 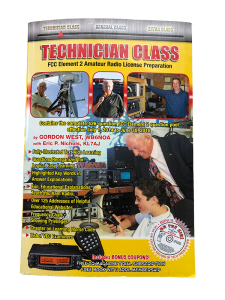 Since I had already been studying for several weeks I felt pretty confident that I could commit to the class and put in the extra work to keep up with the rest of the class. I ran over to the local Ham Radio Outlet in Burbank to pick up a copy of the Gordon West Technician Class book that the course would be taught with. That evening I drove across LA to meet the instructor and picked up the pre-class material packet. I worked through those materials the next day and found myself in a classroom of a Sheriff Station on the other side of LA  at 8am Saturday morning.

The class was a great experience and it really helped me understand many of the concepts I was confused about. Having someone walk you through the materials and show you actual examples of what was being talked about in the text was a real help.

The course was taught entirely by other Hams, and I was impressed with the community and the commitment of the instructors who were willing to give their own time to help all of us get through the diverse set materials. Sunday afternoon, our class took the test along with several people who just showed up to the test session and I managed to pass. A couple of weeks later, the FCC issued my call sign KM6PVT.

Step one of the journey was now complete, I was officially a Ham.  If felt a bit strange at first though because although I had passed the test and had a shiny new license in my hand, until that moment, I had not been legally allowed to press the push to talk button on the new handheld (handy talkie or HT) that I had purchased. Somehow this aspect of getting a Ham License seems completely backwards to me. There is a lot of book learning that you have to do in order to become licensed but the practical knowledge and experience of actually operating a ham radio station is left until after you have your license.  It seems to me that, there should be an in between step that helps you get on the air, learning how it’s actually done as part of the licensing process rather than forcing you to wait until you can pass a multiple guess test.

I should also note that one of things that had always held me back from going for my Ham license was the thought of having to learn Morse Code. Once I started really looking into getting my license I discovered that the Morse Code requirement had been dropped many years ago and thus the barrier to entry had been reduced to simply passing a 35 question multiple choice test where you can easily access all of the questions and all of the answers to study with.  This made going for the license both significantly easier and much less intimidating.  Since becoming licensed, I’ve started learning Morse Code and discovering its relevancy, but that’s a subject for another post.

With my license now in hand, my next big challenge on my journey into the world of Ham Radio was just ahead of me, getting on the air for the first time.