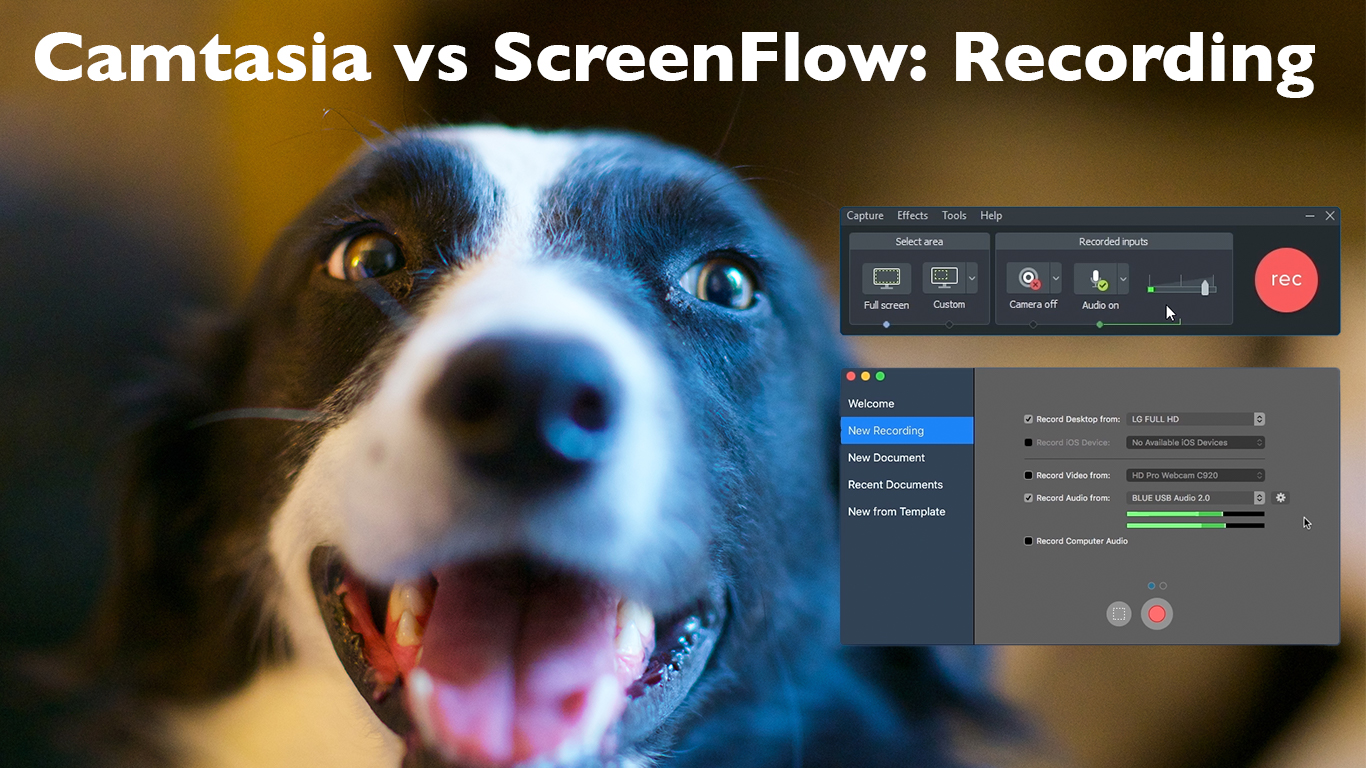 The two leading Screen Capture and Editing tools, Camtasia 2018 and ScreenFlow 8 are now available, so how do they compare as Screen Capture tools?  In this article we’re going to compare these two tools based on 5 criteria: Recording Options, Mobile Device Recordings, Audio Recording, Export Options, and Workflow.

Camtasia 2018 is available for both Windows and Mac while ScreenFlow is only available on the Mac. Camtasia has a unified user interface for both platforms making it easier for those of us that need to go back and forth between the two platforms.  The functality between the Windows and Mac Versions of Camtasia are also fairly similar, but there are a few differences which we’ll point out as we look at comparing these applications.

Both Camtasia and ScreenFlow have dedicated Screen Capture tools for recording your entire screen, a specific window or a custom region of your screen. They both will allow you to record your webcam, a microphone, and any sound coming from your computer. These are certainly the most basic functionality you would expect out of every screen recorder and they both perform equally well at these functions.

Camtasia 2018 for Windows offers a ton of customization options within the Camtasia Recorder. Here’s a detailed look at the options.

The biggest strength that Camtasia for Windows offers is that it gives you the ability to really customize the recording settings in terms of Audio and Video codecs that you can record in. You will need to set your recording to save in the AVI file format to access these options as shown in the video, but if you need to capture your audio at a specific bit rate, or use a particular video codec then this it totally the tool for you.

Where Camtasia for Windows falls short is in its ability to capture high frame rates.  Both the Windows and Mac versions of Camtasia top out at a maximum of 30 frames per second during the capture but you can edit footage at up to 60fps. If you need to capture high speed footage, especially game play, then this is going to be a major limitation for you. 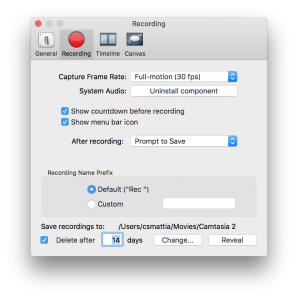 Camtasia for Mac does not offer the same Save directly to another file format option that its Windows counterpart does.  Instead you’re only given the option to simply save into the Editor or save the native TREC recording file into a custom location.  This is a big drawback if you plan to edit your recordings in anything other than Camtasia. It also means that you have no control of the recording bit rate for compression codecs used during your recordings.

Another difference between the Mac and Windows versions of Camtasia, is that in the Mac version you can have Camtasia automatically delete your recordings after a specific time period.  This is helpful in saving space on your hard drive but its a pretty dangerous feature in you ever need to go back and continue working on an older recording and you haven’t properly archived as a dedicated project.  A detailed look at the Camtasia for Mac Recording Settings can be found in Chapter 2 of Camtasia 3 for Mac Essential Training.

ScreenFlow 8 takes a slightly different approach to the customization of recording settings. It also does not have an option to save directly to a custom format where you can choose the audio and video codec settings like the Windows version of Camtasia, but it has several options that simply do not exist in Camtasia at all. First is the ability to capture high frame rate content. There’s an option for Highest frame rate that is completely dependent on your mac’s available processing power. There is not a specific frame rate that’s noted here, but frames rates of 60 to 90 frames per second are certainly possible on faster macs.

Two other notable features of ScreenFlow offers you are the Record in a Loop and Stop Recording Timers.  The record in a loop feature is great for capturing some activity that you don’t know exactly when it’s going to take place.  This is especially helpful in troubleshooting, application development, and user testing. The Stop Recording After option is ideal for Lecture Capture and Webinar capture.  You set a time period for how long you want to record for and Screenflow will automatically stop the recording for you after a set period of time.

Here’s a detailed walk through of the Screenflow Recording Settings.

Once again Camtasia and ScreenFlow take very different approaches to Mobile Device Recording on each platform.

The Mac version of Camtasia can also take advantage of Fuze running on Android or iOS. Check out Chapter 5. Working with Media for detailed walk through for each platform. But, the Mac version can also directly record a connected iOS. One drawback to iOS recording in Camtasia for Mac is that when you’re recording from an iOS device, you do not have the option of also record your Desktop at the same time.  Here’s a detailed walk through of setting up iOS Recordings in Camtasia.

Screenflow can directly record a connected iOS device, capture the sound from the device and the audio captured by the microphone while simultaneously recording your desktop and WebCam. This can be a really big deal if you need to show the interactions between an iOS app and a companion app on your desktop. You can even preview the device on a separate monitor during the recording by using the ScreenFlow Recording Monitor. Chapter 2. Creating Recordings has detailed walk throughs for Recording iOS Devices and Using the recording monitor.

Both Camtasia and ScreenFlow will work with 3rd party apps such as Reflector that can display iOS and Android devices directly on your PC or Mac.

As mentioned earlier, Camtasia for Windows has the unique ability to really customize the audio compression codec settings used during a recording.  If you need to record say 24bit audio, then Camtasia for Windows is the only one of these screen recorders that currently offers this option.

Camtasia for both Windows and Mac will only allow you to record audio from 1 microphone source and your computer.

ScreenFlow on the hand, has several unique features that really sets it apart especially in its ability to record multiple tracks of audio at the same time, up to 16 separate tracks of audio to precise. You can do this with either a multitrack audio interface or by creating your own custom Aggregate audio interface using the built in Audio MIDI Interface app on your Mac. This is especially helpful for recording podcasts or gaming sessions with multiple presenters or players.

Another unique feature of ScreenFlow is the ability to preset the panning for each audio track that you’re going to capture, adjust the make up gain for each track independently and select which tracks will be captured.

Camtasia for Windows is the only app that lets you save directly to a standard format that can be directly imported into other video editing platforms such as Premiere Pro CC or Final Cut Pro X. This is mostly only an issue for large  screencast production workflows.

The general workflow that both Camtasia and ScreenFlow are set up for is to edit your screen recording inside of their own native editor and then export from there. There are sharing options from both apps that allow you to export from their respective timeline to a format that can be imported into other editors but its an extra step that can really slow down your productivity. ScreenFlow does offer a robust Batch Export option that can be a great work around if you need to record with ScreenFlow and Edit in another program.

For Camtasia 2018 on both platforms, the general workflow is Record, Edit, then Share your work.  During the Editing phase, you can take advantage of the new Camtasia Library feature that gives you direct access to reusable clips and sequences. Library assets are available to you across all of your projects on a single machine. But libraries can not be shared between users of a single platform or across platforms as of the writing of this article. Here’s a quick overview of the new Library feature in Camtasia.

For a more indepth look at Libraries, check out the rest of Chapter 6. Working with the Library.

For maining a consistent look across your projects, Camtasia 2018 also now has a new Custom Theme feature that lets you choose specific Colors and Fonts that are relative to your brand and easily apply those settings throughout your project during the editing phase. A detailed walkthrough can be found in Chapter 3. Editing in Camtasia, look for the movie called Creating your own custom theme.

ScreenFlow 8 has  a new custom Template feature that lets you set up your own project template and after a recording completes, your Screen Recording, WebCam, and iOS device recordings will be automatically composted together with additional clips according to your template.  This can be a huge time saver if you regularly create screencast content.

ScreenFlow also takes the creation of a consistent custom look for your content to a whole other level with the new Styles Feature. You can create custom styles for any combination of settings that you like inside of ScreenFlow and apply them during editing or automatically to content in your Templates.  This is an amazing new feature in ScreenFlow 8 and really sets it apart from every other Screen Capture program.

ScreenFlow also has a Global Library feature where you can access clips across multiple projects.  The Global Library is great for a single user, but it too is not shareable with other users at the present time. Chapter 3. Editing in ScreenFlow has detailed walkthrough of the Libraries, look for the movie called Using the libraries.

Both Camtasia 2018 and ScreenFlow 8 offer a wide range of recording options to meet your specific needs. Which of the two programs is better for your needs is something this comparison has hopefully helped you narrow down.

For a detailed look at these apps please check out:

If you found this article helpful, please share it with your social media network, and connect with me on LinkedIn and Twitter @csmattia