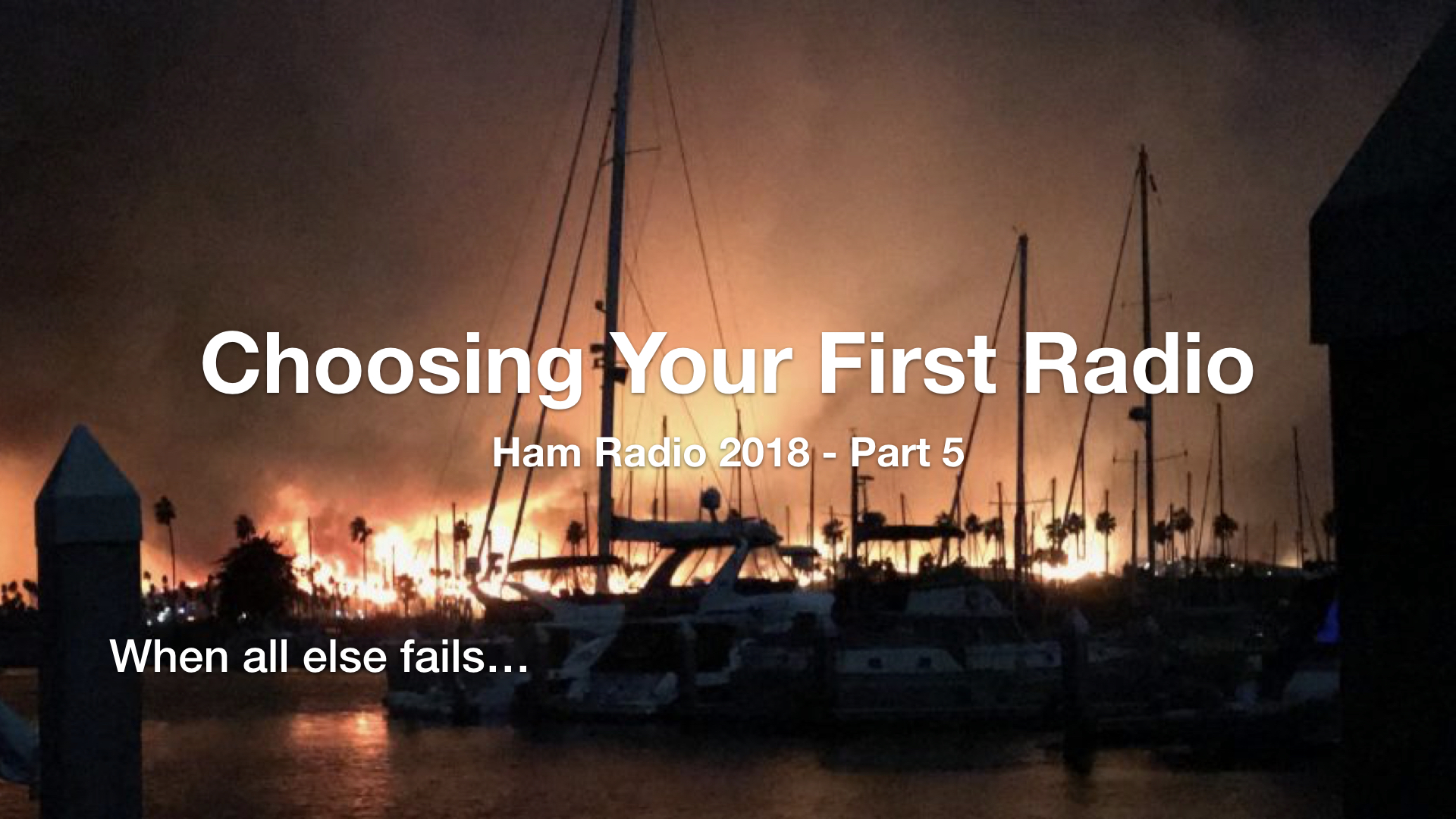 The first Ham Radio you are likely to purchase is a handheld commonly called a Handy Talkie or HT. It really doesn’t matter what you’re primarily interest in Ham Radio is: Emergency Communications, Prepping, Rag Chewing, Contesting, Weather Tracking or any of the dozens of other aspects of the hobby, the HT is generally where you’ll start. This article describes the thought process, experiences, and decision making journey I went through in choosing my first HT.

I make a living teaching others how to leverage technology so I spend a lot of time learning and using the latest gadgets. From the latest iThingy, gadget, gizmo, and software that is suppose to solve all of your problems,  I am constantly testing gadgets to figure out how they work and how to integrate them into a variety of workflows. But searching for my first Ham radio proved to be challenging and at times, a frustrating experience.

Growing up, telephones were just phones. The first time I used a cell phone it was one of those bag phones that was installed in car and had a curly wire that connected the handset to the base unit. I went through all of the stages of phones that looked like an old VHS tape, those that looked more like a fat candy bar, the flip phones, heck I even had one of those Motorola Rokr phones that could play music, that thing was simply awful.  They were all pretty awful in retrospect at everything besides making a phone call. Then the iPhone came out, and phones got a whole lot better and easier to use.

The iPhone was released in 2007, it was now 2018 and when I started looking at the current Ham Radio handhelds it was like taking a trip back 1996 when the Motorola Startac was the king of the cell phones and I wanted to ditch my candy bar Nokia for one in the worst kinda way.

Ham radio handsets really are much closer to some of the early cell phones, back when a phone was just a phone and not a music player, calendar, email, web browser, video player, gaming device and camera.  They are really designed to just be radios and it took me a little while to really wrap my brains around that concept and realize that it was not just ok, but a better idea.

A ham radio is not designed to be your primary communication device that you have in your pocket all day long, checking your email, surfing the web, sending a tweet, updating facebook, posting to your instagram feed, etc. if it was, there would simply be an app for that.  Well in fact there are some apps for that. Apps that allow you to connect digitally from your phone to a repeater connected to the internet, but that’s another post and not very helpful if the cell towers and internet services are down.

The challenge with having all of the functionality of your typical modern smart phone is that all of that stuff burns through your battery pretty quickly and when you really need your smartphone to act as an emergency communication device, many of us have found ourselves with little to no battery life left when we need to communicate the most. To make matters worse, when a real emergency happens and the cell towers are up and down, your smart phone burns through your battery even faster as it constantly searches for cell signals. Remember that smartphone really, really, really wants to be connected to the network, so it will keep powering up the antennas to try and re-establish that connection, and that takes power.

Therefore from an emergency communication device standpoint, having a separate dedicated device can be extremely beneficial. Also having a device that does one thing, does that one thing extremely well, and nothing else can be a huge benefit.  In an emergency, the fewer possible points of failure, the better. The last thing you need is to have to search through layers of menus, press the wrong button because they are too small and close together, or accidentally turn a dial that changes the channel or volume on your device.

Now that said, the UI/UX of every HT I’ve researched and tested is simply awful by modern standards. Most of the current HT on the market from all of the major manufacturers are all designs that would have been fairly good up until about 2006 but have really not progressed beyond that in more than a decade and that is just sad and frustrating, especially given the price of all of mid and high end units.

There are HT on the market that range in price from $30 – >$500.  These vary in features, quality, and UI/UX like any other piece of modern technology.  On the low end are units that are good entry level units, but they are often difficult to program, can have issues with quality and reliability but they are so cheap that they are a great starting point for many new Hams or to simply to have as a backup unit. In the middle of the pack are units that are good solid radios that have great build quality, a decent UI/UX but are often limited in the features available in a specific model. On the high end, you find a more feature rich unit, that seems to be generally of fairly high quality and roughly the same UI/UX as the mid priced units.

For many tasks, the mid priced units from Yaesu and Icom are probably still the sweet spot for most users. A good dual band analog unit that supports at least one of the digital modes and offers a more ruggedized design is probably the best compromise between features set, form and function. For emergency communications, these units also a great choice because they are more focused on the one single task rather than cramming lots of extra features into the box.

Ultimately my decision on which unit to purchase came down to feature set and quality reviews. I wanted a unit that would be extremely flexible and allow me to really explore as many areas of the hobby as possible with one HT unit. I am extremely interested in emergency communications, but that is not an exclusive use case for me. I would have liked a unit that was fully weather sealed and more ruggedized, but after looking at all of the current options I decided to go with the Kenwood TH-D74.

The D74 was by far, the most expensive of the group of units that I looked at, but the features that really won me over were: tri-band radio; dual transmit and receive so I can monitor two frequencies at once and transmit on either one; Bluetooth and USB connections; microSD slot for recording and making backups,  access to digital modes such as DStar; built in GPS with APRS, and the ability to receive signals on the B band that cover all of the HF bands when an external antenna is connected. Of all of these features of the D74, the one that I have found least helpful in my area is the addition of the 220 Mhz band since nearly all of the repeaters I find I use regularly are on 144 or 440 Mhz, it’s nice to still have the option, but I’m finding it the least useful from my wishlist.

If you purchase your HT from a local dealer, then ask if they will program in the local repeaters for you. Ham radio shops are almost always staffed by hams that are more than happy to help get you up and running. I purchased mine at the Ham Radio Outlet in Burbank, and they took the time set up the initial programming for me, and that was a huge help.

If you purchase your HT online, then you will need to figure out how to program the unit yourself before you can begin using the radio. Basic programming can be handled on the unit itself and you will certainly want to learn how to do this, but using your computer is the way to here. To program your HT with a computer you’ll need some software for your HT, and a connection cable.

Programming your new HT is one of those areas where the user experience falls short on many HT units. The software you will need to program your HT with may be free or it might be a separate purchase.  More than likely, the software only runs on Windows, so for Mac users you’ll probably need to run this software in a Virtual Machine. All of the software I tested also felt like the UI/UX was written in the last century and little to no attempt has been made at updating or streamlining the UI/UX. The software generally does work, but it requires a lot more effort to do the simple things that everyone is likely going to want to do on their new HT such as adding and organizing the repeaters in the HT memory channels.  The cable that you’ll need to use to connect your HT to your computer may also be a specialized cable, although many units have adopted a standard micro USB cable for this. These were both factors that helped drive me to the D74 as Kenwood offers free software on their website and you can use a standard micro USB cable.

You’ll may also want to pick up some accessories that generally do not come with a new HT such as: handheld mic, higher gain antenna, spare battery, 12 volt charging cable, a drop in charger, magnetic mount antenna, hot spot, and a headset mic. While these are not essential, especially when you first get started, they are certainly nice to have. When I purchased my first HT, I picked up a handheld mic at the same time, and have slowly added other accessories as I’ve found a specific use for them.

Since getting the D74 I’ve been really happy with my choice, it turned out to be the right HT for me. It’s been more than 6 months since I purchased it and I’m still learning to use many of its features.  In the past few weeks alone, I’ve learned how to use the Bluetooth connector with my laptop and the WinLink software to send and receive email using the radio instead of using a normal WiFi or Ethernet connection to the internet.

When you choose your first HT, your specific needs are not likely to align with mine. Hopefully this thought process and decision making journey that I went through will help you choose the right HT for your needs.