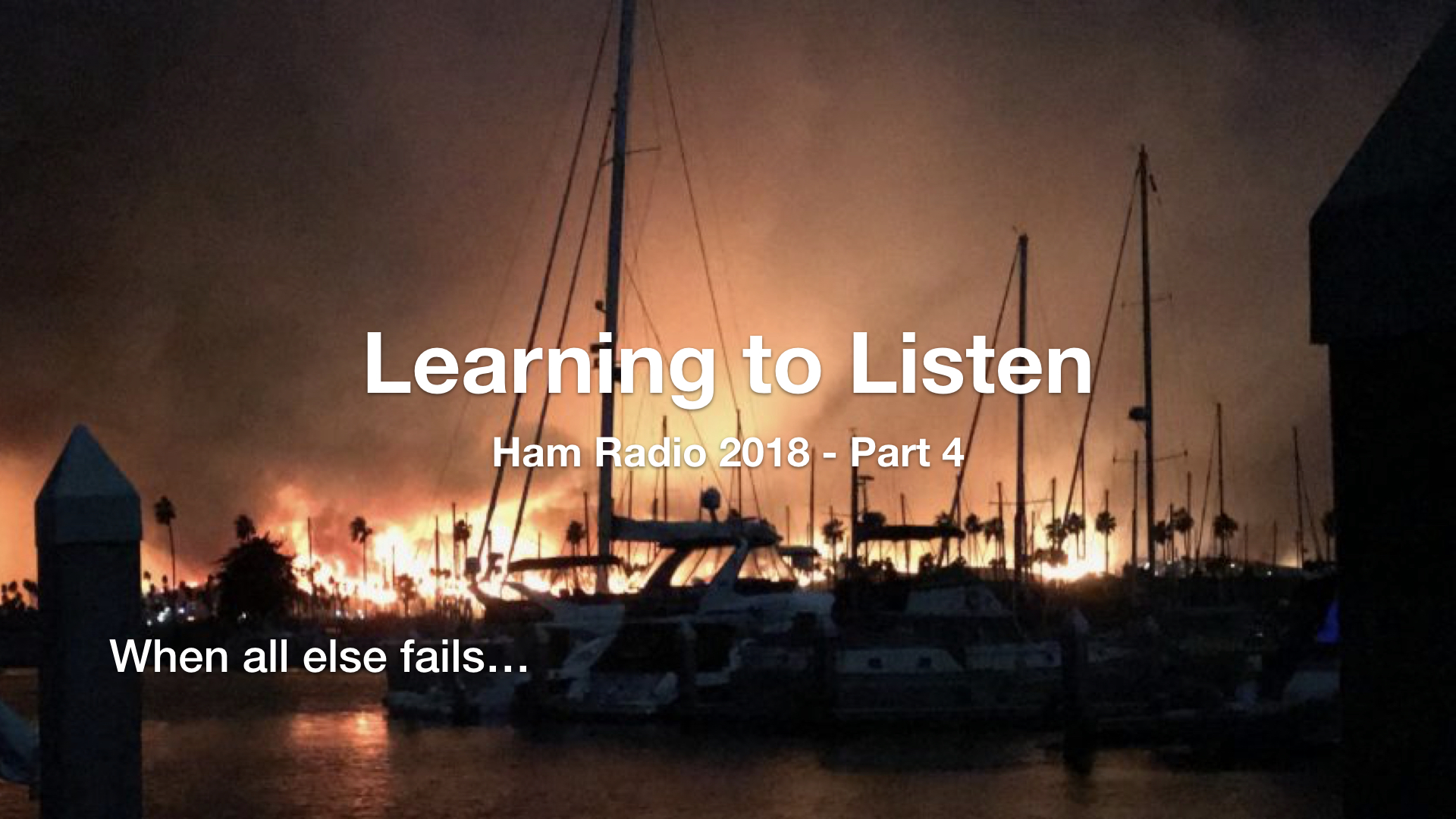 You learn a whole lot more by listening, than you do by talking.

In an emergency situation, the traffic flying back and forth between the command center and first responders in the field can sound confusing and difficult to understand. Information goes by really fast so you have to be prepared to hear it and instantly process it in your mind. In other words you, have to learn how to listen.

Ham Radio is one of those hobbies that requires a lot of listening, and is as expensive as you are willing to make it. If you don’t have a lot of money, then you start with lower cost new or used equipment, possibly even something given to you for free. Then as you gain more experience and resources you learn what investments make the most sense for you.

For me, I suppose I really got my start learning to listen to the radio as a kid in the mid 80s. We didn’t have very much money when I was growing up and one way we would go on affordable weekend vacations was going to listen to sales pitches for timeshares.  We’d get a free night or two at one of these timeshare vacation places where we would have to listen to all of the wonderful ways this resort was going to be perfect for us and oh by the way just for coming you’ve also won some special prize. One year it was boat! Well, it more of a blow up raft for two small kids, but my sister and I had a lot of fun playing with the blow up boat. Another year the big prize was a shortwave radio that could tune into AM, FM, and TV (UHF & VHF) broadcasts.   This was really my start into learning to listen to the radio.

When we got home from that trip, I managed to get the short wave radio for my room and I quickly learned that since the radio was not a very high quality radio, if I set the switches that changed the bands from AM, FM and TV to be positioned between these settings and then very slowly and carefully turned the main dial, I could pick up all kinds of other things on the radio.  I found that I could hear Planes flying up the Chesapeake Bay calling into the tower at a nearby airport. And I could pick up conversations by people that I had no idea who or where they were, but it was fascinating to just sit there in my room and listen to all of these people and conversations. The conversations themselves were not very interesting, but the fact that I could hear them just fascinated me.

Fast forward a few decades and I’ve once again found myself wanting to listen in on the air waves. With the Thomas Fire rapidly growing I turned to listening to what was going on by tuning into a live internet feed for the Ventura County Fire Department on Broadcastify. Suddenly, all of those hours listening to that cheap short wave radio seemed to pay off.  My ears were tuned well enough to follow much of what was going on. As the hours turned into days and weeks, I was finding that I could tune into the traffic much faster, understand more of what was going on right then, directly from the source. Especially during the first few days of the fire I found myself not able to turn off the live stream.

As I began to study for my ham license I started to learn a little bit about Software Defined Radios or SDR. I did some quick searching online, it turns out that you can buy a small USB dongle that you can connect to an antenna and then plug into your Mac or PC, and then install some free software and you can tune in and listen to many of the Ham bands and analog emergency traffic without a license. Best of all, you can get one of these little SDR dongles for less than $30.  I suppose that’s quite a deal for not having to sit through a timeshare sales pitch.

There are SDR dongles that can transmit as well as receive signals, but at this cheap entry price point, it was a receive only device that I had picked up. I was most interested in being able to listen to emergency traffic anyway so transmitting was not a need I had at that point.

The SDR radio really helped me learn to understand the waterfall display, what signals look like on the bands, and how to filter them so I could hear just the signal I wanted to listen to. The software was pretty easy to get up and running and I was having a lot of fun diving into the world amateur radio.

The next challenge was figuring out which frequencies to listen to. It turns out, that’s really easy to figure out.  If you do a search for your target area and service and the term “radio frequencies”, the first hit that pops up is for a site called RadioReference.com. Here, you can quickly figure out what frequencies to listen to, tune the little SDR dongle and presto, you’re able to listen live to what’s going on. With the waterfall display it’s easy to see where most of the traffic is. Use the Radio Reference site to get you really close and then just look at the water fall to see which channel is most active. It’s fascinating to listen to the information direct from the source as opposed to what is filtered by the media. Perhaps best of all, there are no commercials or time share sales pitches to listen to.

Since the SDR I purchased was only able to receive signals and it was so cheap, I was able to start exploring the ham bands before I had received my call sign and was legally able to transmit. Looking back, this was extremely helpful because I developed a much better understanding of what I needed and wanted in my first ham radio.