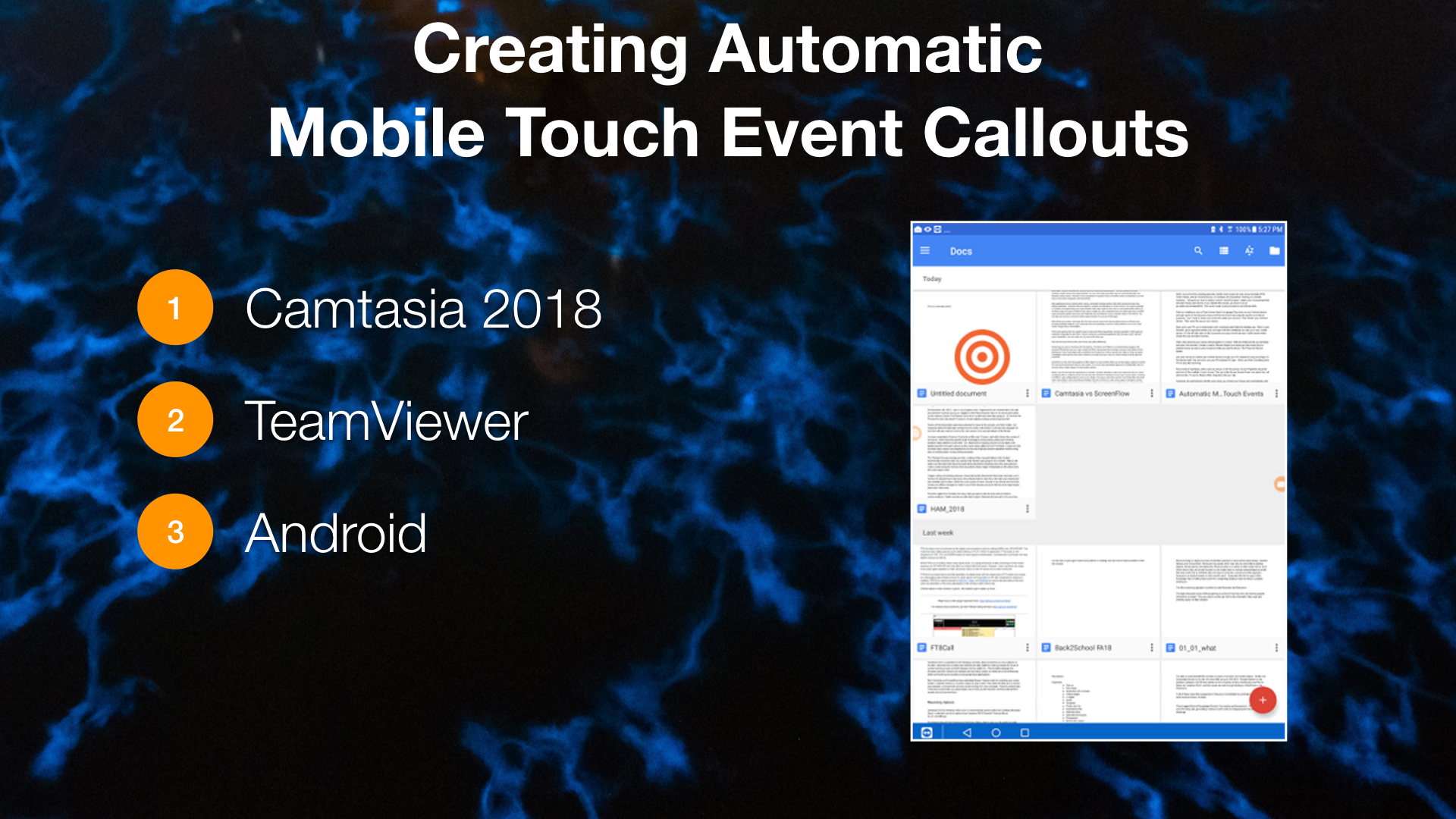 I have been asked by several viewers of my Camtasia 2018 Essential Training course about how to create Mobile Touch Event Callouts. Unfortunately, as of the initial release of Camtasia 2018, there is still no tool for creating the animated touch call outs you see me use in my courses; I’ve had to create and add those manually during editing.

One user in particular (Tine Müller) has asked me to try and figure out a way to automatically create touch event callouts, especially on Android device recordings so she can demonstrate her app FindToilet better.  She suggested I try to use the TeamViewer app in a manner similar to how I show the use of Reflector3 in my courses.

The main difference between TeamViewer and Reflector, is that TeamViewer is designed to allow remote control of devices that have a corresponding app installed on them.  This is very similar to a using Windows Remote Desktop or Apple Remote Desktop to take control of another computer. TeamViewer has extended this support idea to mobile devices as well, so controlling a touch device from a remote computer is handled with the remote computer’s keyboard and mouse.

Given this, it looks like you get basic control over a mobile device for simple touch and one finger swipe gestures. Since Camtasia records the mouse and meta data associated with the mouse, its possible to hide the mouse cursor, and only display Click Event Call Outs to show where the user clicked and have it appear as a touch event.  This generally gets the job done, but is certainly going to be limited in its utility in many situations, but it seems to work fairly well and you get a fair amount of control over the finished look.

While creating this tutorial I ran into issues when I attempted to reconnect my device to my PC. This usually resulted in me having to restart the Android Tablet before the connection could be re-established. I’m not sure if this was simply a user issue since I have not used the TeamViewer app before creating this tutorial, or an issue with my tablet, the software, or even my network.

Overall, though this method seems to work fairly well and just takes the couple of tricks I show in the movie to make it work.

The touch event callouts you see in my courses are all created with a custom plugin I created for my own use in Final Cut Pro X with Motion. If you’re interested in learning how I created that plugin or if you have other tutorial ideas send me a note through my contact form or via twitter @csmattia.