The first PVC project I built after the booth construction was completed was to create a headphone stand.

To complicate matters a bit more, I was also doing all of my own editing at the time so I had invested in a nice set of closed back studio headphones for critical listening. Therefore I needed a headphone stand for 2 fairly large headsets that were going to be my core tools for creating my first self produced courses with.

I searched for a headphone stand on Amazon and other online stores, but wasn’t happy with the models I was finding. The prices ranged from about $15 to $90, all of which were out of my initial budget. Most models were designed for 1 headset, were not tall enough, not stable enough or were simply too expensive.  That’s when I broke out my bin of PVC parts and started putting together a nice, sturdy, and functional dual headphone stand for about $5. 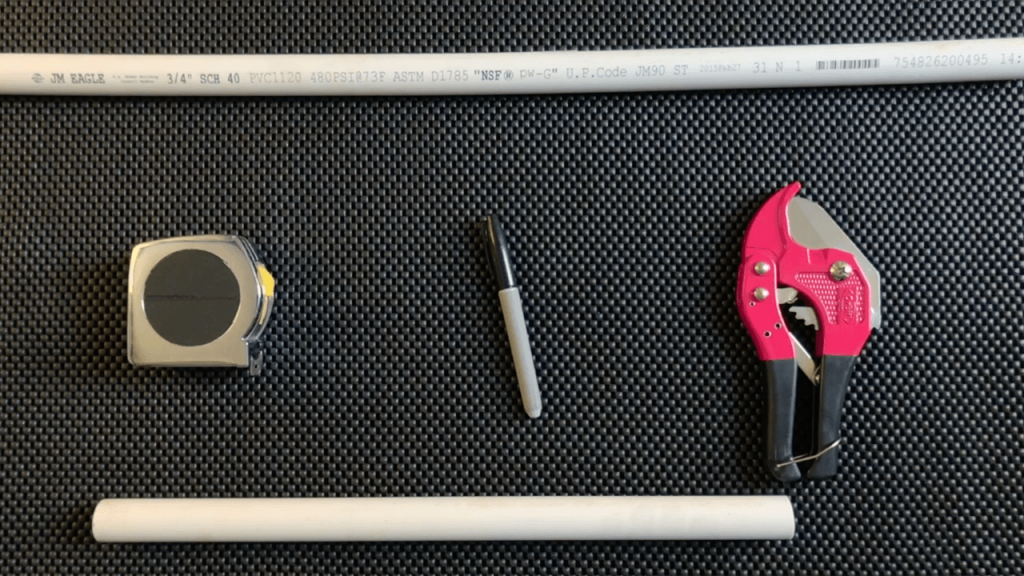 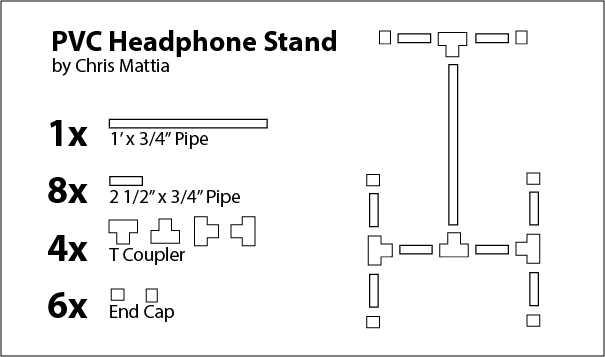 Assembly is really straight forward. Everything is dry fit together. I had considered glueing the stand together, but never found that I needed to do that.

Connect the center ports of 2x T fitting on either end of your long pvc pipe section.  This will act as the central support for your stand.  In my diagram I used a central pipe that was 12 inches long.  Make sure that your two T fittings are aligned with each other by laying the parts down on a flat surface and pressing both T’s into alignment with each other.

Next add the 4x short side arms, I used parts that were 2 1/2 inches long.  On the top two arms add an end cap fitting.  On the bottom two side arms add another T fitting.

Finally add the remaining 4x short PVC legs with an end cap on each one.  The end caps help to balance the stand.

Make sure the headphone stand will stand up straight and press all of the parts together tightly.

Optionally add the felt feet to the bottom face of each of the base fittings.

The only modification I ever made to the PVC headphone stand was to add the small felt pads to the bottom of the stand so that the the stand didn’t scratch my desk, and if it got accidentally bumped during a recording, the small pads would act as tiny silencers.

The PVC headphone stand served in the booth for nearly 2 years. In the summer of 2017 I began the Training Tips Weekly series (lynda.com | LinkedIn Learning) and needed to set up a more permeant in booth live action recording rig.  That rig took up a considerable amount of desk space and since I was using a new microphone on an articulating arm I was now down to a single pair of headphones that I needed to hang. I found I could use a Super Clamp to attach my mic boom arm to my desk and use the handle of the clamp to hang my editing headset from.  So I moved my PVC headphone stand into temporary storage.

I’ve recently put the PVC headphone stand back into service.  I did some re-arranging of the EdTechGarage and moved the old desk back into the back of the garage for a variety of reasons but one of the results of that move is that I now have a producer station outside of the booth where i can work with other talent in the booth if I need to.  Therefore, not only is the PVC headphone stand back in regular service again, but so is my recording headset, which once again is living on the stand.